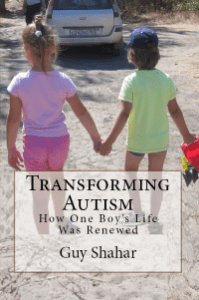 A new book challenges the notion that autism is a disability, and offers practical approaches to parents and carers to bring out the best in their autistic children.Transforming Autism by Guy Shahar MA is set to be launched on Wednesday 1st June as part of the new Transforming Autism Project, which aims to redefine the condition. It asserts that far from being a disability, autism is simply a condition of profound sensitivity to emotional and sensory stimulus, and that if they are properly understood and treated accordingly, autistic children have astonishing potential.

The book describes Guy’s family’s quest to make a meaningful improvement to their own extremely autistic toddler (now a contented 6-year old thriving in a mainstream school). It describes how they opted out of a reliance on the traditional medical route and a preoccupation with diagnosis, and sought alternatives that could make a true difference. It presents in detail the unusual but fundamentally simple approaches that they were exposed to, and how they implemented these to transform their son’s life.

Their journey included a visit to a specialist clinic in Israel, which was dedicated to the family alone for 3 weeks, and 3 years of individual play therapy at home – supported by student and volunteer therapists – which saw huge improvements in the boy’s quality of life. The book explains the principles employed during this therapy (and subsequently in everyday life) and gives many examples of how it was used and what results it brought. It goes on to introduce new therapies that they have since tried, and how they have implemented them day to day to create a safe and inviting environment around him in order to foster his happiness and resilience. It ends with a heartening depiction of his current condition and the immense kindness and idealism now evident in his personality. 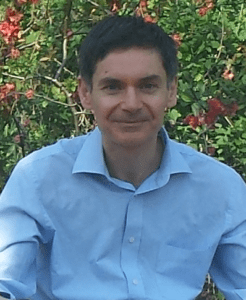 On writing the book, Guy explains, “It was never something I wanted to do.”  A colleague at work advised him in January that he should write a book about his experiences with his son.  He explained to her that this wasn’t a good idea as he didn’t have a clear recollection of what had happened to their family, that they were still in the process of dealing with the autism and so didn’t have any firm conclusions to draw, and that he didn’t have time to read a book let alone write one.  “But that evening, I was surprised to find myself sitting in front of the computer and typing out the introduction.  A little over 6 weeks later, I had a 50,000 word book in front of me.”

During that 6 weeks, Guy became very ill, unable to go to work, and barely able to walk around the house.  “Some days, I wasn’t even able to focus on reading or answering an email, and yet, somehow, I would knock out 2 or 3000 words of the book.  It was as if it was coming from a different place.  I didn’t know what was going to come next until I had actually typed it.  I didn’t need to worry about what I remembered or what conclusions I could draw – it all just came organically while I was sitting and writing.”

When he had finally produced it, he understood that it was a very significant book that pulled together all of the lessons he had learnt, and that had been so successful in turning around his son’s life, in a clear and accessible  way that could be of huge benefit to other families with autistic children.

It was with the same approach that he created the Transforming Autism blog, and later the Project of the same name.  “If you’d asked me 2 months ago whether I had any intention of starting a blog, I would have said never!  I didn’t have any idea how to do such a thing, and it would have just seemed so daunting.  But, I somehow found myself surfing the Internet to work out how to do it, then making some tentative steps to start a basic blog, and when it slowly started to look like it could be really useful as a way of inspiring other parents and carers of autistic children, I went all the way and then published it.”

The Transforming Autism project aims to make the book’s insights and methods available to the very many parents and carers who might otherwise never come across them, and to support them in implementing any parts of these into their everyday life. Contrary to the popular belief that autistic individuals are emotionally disconnected, Transforming Autism claims that they are in fact acutely emotionally aware, and that it is precisely because of their extreme sensitivity to the sorts of emotional expressions they encounter daily – which they often perceive to be intense and negative – that they feel overwhelmed and forced to attempt to cut themselves off from what is going on around them. It maintains that the only way to truly transform the life of an autistic child is to transform the environment where they spend most of their time into one of peace, support and warmth, so that they have the space to freely express themselves, and that then, we will be amazed at the richness we will find in them.

Pushing the Boundaries of Autism

Sensitivity and Idealism in Autism

Please use the form below if you would like to get in touch.